Although belts are not worn in classes, there is a complete belt system in Krav Maga. The following timeline represents typical progression through the Krav Maga belt system and are based upon students training an average of two to three times per week. Please be aware that students progress through the system at different paces. 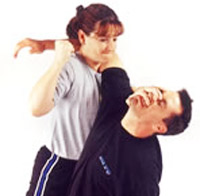 This entry level class is designed for all new Krav Maga students. The goal of class is to teach the basics of self-defense and fighting. Students will learn Krav Maga's fighting stance and movement, various punches, kicks from a standing position as well as from on the ground, elbows and knees, and how to defend against punches, chokes, headlocks and wrist grabs. Students who train an average of two to three times per week should expect to complete the curriculum in 3 to 4 months before testing into Krav Maga Level 2.

Upon completing Krav Maga Level 1, students will participate in a Yellow Belt workshop and test into Krav Maga Level 2. In this intermediate level class students will continue to review and hone the skills learned in Krav Maga Level 1 and will learn additional punches and kicks, punch defenses with counterattacks, kick defenses, and defenses against various chokes, headlocks, and bearhugs. Students who train an average of two to three times per week should expect to complete the curriculum for this level in 6 months before testing into Level 3. 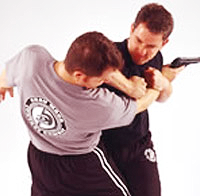 Upon completing Krav Maga Level 2, students will test into Krav Maga Level 3. In this intermediate class students will continue to train on strikes, defenses against strikes, and self-defense, including more advanced techniques that involve defending against weapons such as knives, guns, and sticks. Students who train two to three times per week should expect to be ready to test for Green Belt in 10 months. 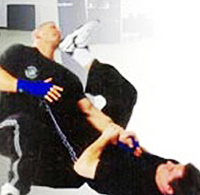 This class was designed specifically for Green Belt students interested in more advanced training, emphasizing Blue Belt techniques. The curriculum includes additional punches and kicks, more defenses against punches and kicks, defenses against knives, guns, and sticks, as well as advanced ground fighting techniques. Since there are a limited number of Krav Maga 4 classes offered, Green Belt students are encouraged to continue training in Krav Maga 3 classes as well. 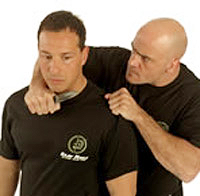 This class is for advanced students only and covers all the advanced curriculum including fighting, ground fighting, advanced self-defense, all weapons defenses, as well as third party protection.